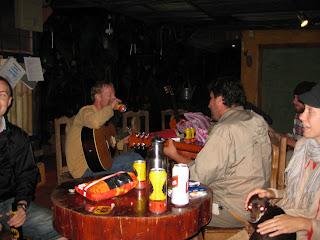 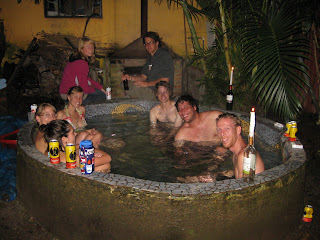 While at the Montana Linda, the hostel we stayed at in Orosi, we had a jam session. To me it was a bit of a funny idea at first, because there was only one other person at the hostel at the time along with the two of us and booster. So I thought it would only be like the three of us and the two owners/locals who came up with the idea. Well, that night three people who had been at the hostel the previous weeks and were now in homestays returned and 6 people checked into the hostel for only one or 2 nights. Crazy! So we had a full house. Three guitars. I played a bit of harmonica. Plenty of beer and then we hit the hot tub. It was awesome. It took like 8 hours to heat the thing because the rain water that had been collected had to be pumped through the tubing that coiled in the fireplace before being dumped into the tub and then repeated until the 14 or so of us from Holland, Costa Rica, Germany, Israel and Canada eased into it. Then we all took our turns singing our national anthems before relaxing and just talking the night away. Truly a special night to remember.
Posted by Beth, Bhads, Baby Noa & Booster at 10:06 AM